HISTORY OF BOARD SHORTS

Background History
Riding waves has been around, in one form or another, for as long as people. It is believed, Pre-Inca civilizations practiced surfing, but since they used a stick or paddle there is contention that it would be more similar to what we know today as stand up paddle boarding. The earliest known description of surfing was from the journal of British naturalist Joseph Banks aboard the HMS Endeavour during James Cooks third voyage through the islands of Tahiti, he described several local men as entertaining themselves by repeatedly riding the waves in a canoe. It is believed that the islands of Western Polynesia practiced what would have most likely resembled todays surfing. Where we first really learn anything about surfing is Hawaii. They called it “wave sliding” and did not consider it merely a recreational activity, instead it was integrated into their culture. The ability to surf well determined social structure. The best beaches and best boards (a massive 12 feet) were carved from the trunks of Koa trees, these trees were restricted and only to be used for surfboards by the upper ruling class.

Surfing first came to North America in 1907, when industrialist Henry Huntington brought George Freeth over from Hawaii as an attraction, “The man who walked on water”. At the time, visiting the beach for recreation was still a new idea. So, he organized a publicity stunt to promote the opening of his new (Los Angeles – Redondo – Huntington) railroad that would hopefully open up this new idea of leisure and bring vacationers to the shores of the Pacific. A couple of short years later, surfing made it to the East Coast of America, when Burke Haywood Bridges rode his solid wooden plank board out into the waves of the Atlantic in Wrightsville Beach, NC. 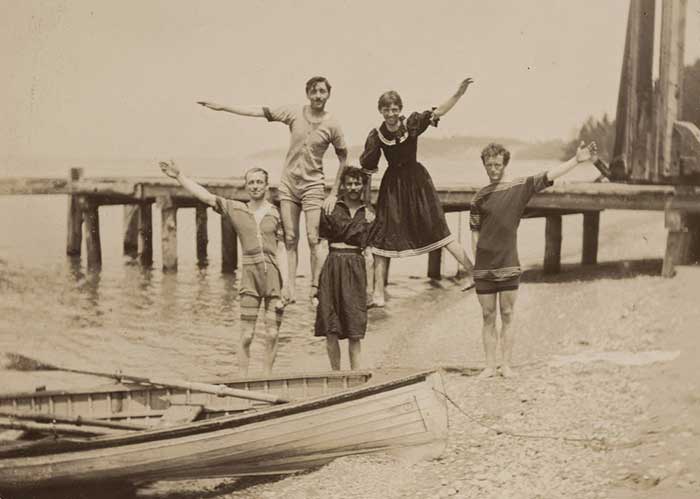 Recreational bathing was still a very new idea and in those early years, lacking precedent, beach attire by default, carried forth the modesty that had been dictated by the more formal inland urban environments.  By today’s standards, to say that turn of the century beach attire was modest was an understatement. Women wore hats, flannel dresses and trousers which all became so heavy when they swam that women would have to hold onto ropes when they went out into the ocean. Showing your arms, legs and neck was considered indecent exposure and could get you arrested by the beach police, who carried tape measures and were an actual thing in many places.. The men wore one piece woolen tank suits, which had the ability to stretch and did not absorb much water. It wasn’t till the 1920’s that leisure dress styles started to relax.

In the early days of surfing, Before WWII, John “Doc” Ball, (who founded The Palos Verdes Surf Club) brought attention to the sport with his widely circulated surf photography. He also in a small homemade way made a contribution to the advancement of swim trunks. Because he didn’t surf in department store clothing like most people, but instead would sew his own - a thick, baggy cotton short, that didn’t bind or blow apart during a heavy wipeout. He starting to create clothing for himself and his friends, that was the beginning of attire that was specifically purpose built for surfing.

In Hawaii, Lyn’s of Waikiki, came out with belted, high waisted, rugged cotton-blended trunks w/ vertical stripping on the hip and sold a few pairs to The Outrigger Canoe Club. Probably the most famous surfer in the world at the time was Duke Kahanamoku who wore his throughout the depression. He traveled extensively giving surfing exhibitions, appeared in a number of Hollywood films and because he was considered somewhat of a heartthrob with the ladies, his outfits had a big international influence on the perception of how surfers should dress. 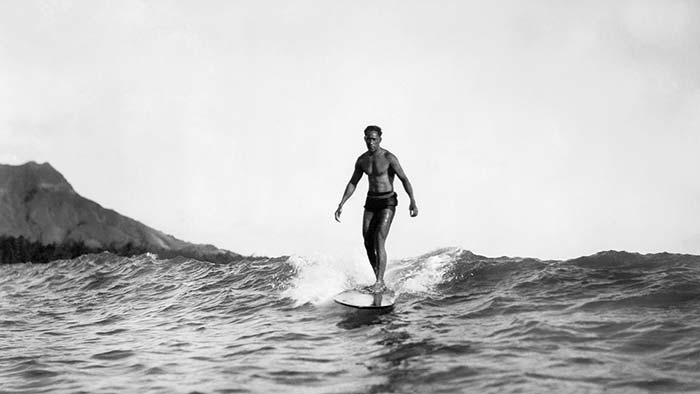 In the late 40's, Members of The Manhattan Beach Surf Club would purchase white sailor pants at the Salvation Army and then would trim off the bottoms so that they ended just below the knees. Using larger sizes (with a drawstring that held them tight) which gave them a baggier inseam which helped protect their inner thighs from the chaffing that occurred from constantly rubbing their legs against the paraffin wax on their boards. Whereas, in the past, men's bathing suits has been fitted, high waisted & often with belts or buckles. The members of The Manhattan Beach Surf Club, (who when not surfing) wore them low on their waist and often left the drawstring untied. They lived in those pants and to others they might have appeared, scroungy and dirty, but they had their own vocabulary, were young, handsome and had a certain swagger, which made them very popular with the ladies. This functional, raunchy style started to define the casual purpose driven attitude and aesthetic for future surf wear. The thing that helped fuel the influence of the Manhattan Beach Surf Club, in part was that their club house was simultaneously morphing into the world’s first retail surf shop. (Velzy Surfboards - opened in early 1950’s). They were all young at the time, but a lot of later big names in surfing came out of that group. 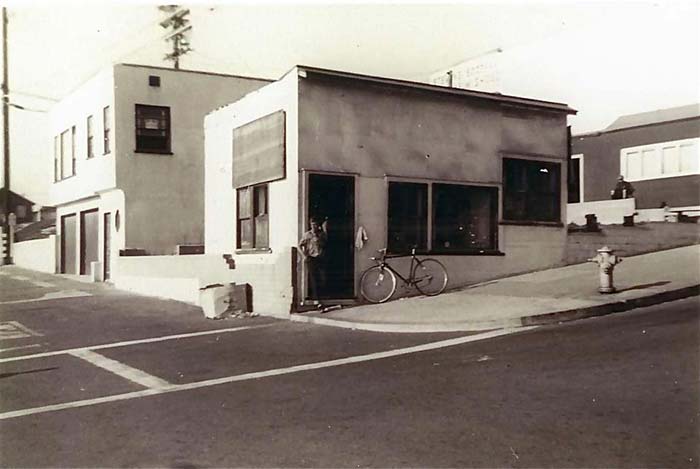 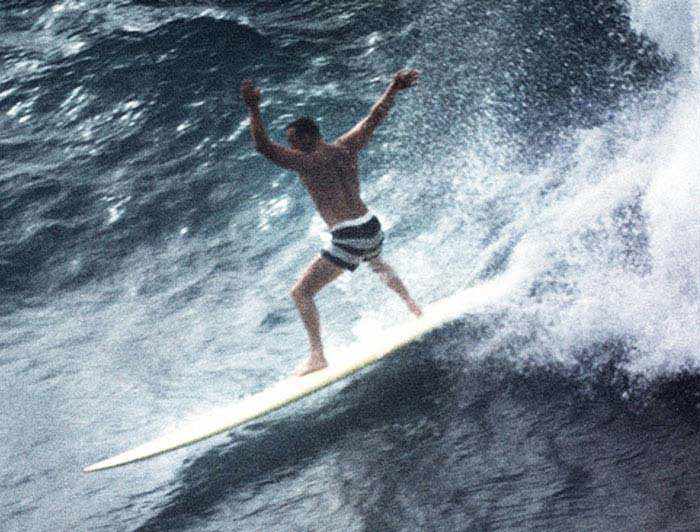 One of Dale Velzy’s young shapers would go on to become one of the most iconic big wave surfers ever. Greg Knoll, known as “Da Bull” because of his large frame and that he would fearlessly charge down the front of giant waves, waves that very few others would be willing to ride. His famous black and white jailhouse board shorts were an early instance of Individuality in surf style clothing. The story according to him goes that, there was someone who had a similar surf style and the other guy kept getting credited by photographers for surfing giant waves that were actually ridden by Greg Knoll. So while in Hawaii, he went to the tailor shop of Minru Nii and had a distinctive pair of board shorts made, so that he wouldn’t be mistaken for other surfers.

1950's
During the Early 50’s, the story of board shorts bounces back and forth and is very intertwined between Hawaii & North America. On the North Shore of Oahu, one long time tailor who had been mending the shorts which the surfers brought in for repair, eventually started creating custom surf trunks of his own  for the local big wave surfers. His name was Minru Nii, he sewed out of a tiny shack in Waianae. His shorts were baggier than normal (scaled up size) and in the early years made out of the typical cotton check pattern that worker’s shirts in the sugar cane plantations were also made from, but eventually evolved into becoming made out of a heavy canvas with a laced front. These trunks started to resemble what today we know as board shorts. These coveted and highly prized trunks were called “ Mahaka Drowners” because they didn’t slide off when you wiped out, unlike the others.

In those days, an industry hadn’t even started yet. What surfers wore arose more organically. Surfing’s widespread popularity was still about a decade off, but it was those early adopters and the personalities behind them that set the tone for future brands.

In 1959, the release of the movie “Gidget” boosted surfing's popularity and what was once a small underground culture quickly exploded into a national fad. The movie's stylists, who knew nothing about surfing, dressed the actors in bright colors that looked good on camera and while it captured the reckless attitude, it did not reflect the actual muted pragmatism that had guided surf wear up until then. But the movie communicated a certain kind of lifestyle, a free-spirited, counter culture cool, which very much caught on with the masses. It spawned many other movies (Endless Summer) and music (Beach Boys) and the trend of surfing literally exploded overnight. What was once a small, localized, carefree cottage industry, found itself being monetized by new brands and quickly grew into a much larger sanitized story. 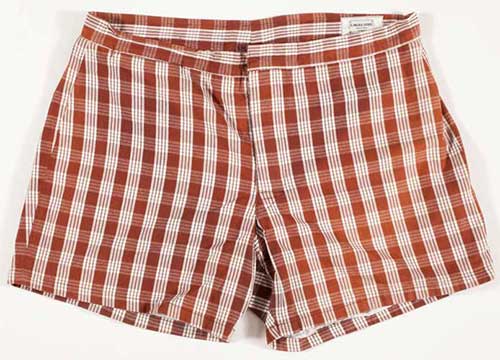 The biggest problem with board shorts had always been how to effectively keep the pants up without a belt. Manufacturers started playing with various methods of closure (side, Velcro, internal belts) and when form started to equal function, we started to see what could loosely be considered the first of technical board shorts.

Hang Ten, (charismatic Peter Drowd) which had been around since the mid-60’s making cotton trunks, rose to fame and became California’s first real major brand. In 1966, they sponsored the first group of “team riders” of which, Greg knoll was one. They were the first brand to really establish an international market. Were the first to adopt nylon as a material and some say the originator or the modern board short.

Sundek changed the silhouette. It had a flat waistband instead of the gather drawstring and a shorter leg, cleaned up aesthetic. Since it was fully made from quick dry nylon, which give it dual functionality because it allowed it to be both a swim trunk and a walk short. 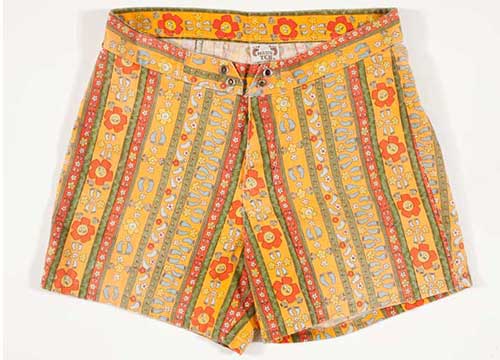 In Australia Stubbies owned the board short business. They really advanced modern day pro surf contests and the inaugural Stubbies Surf Classic in 1977 is still considered legendary due to its perfect waves, unique location and the adoption of a new (man on man) format.

In the 80's, skateboard culture and new wave music started to rise in popularity and with it the brand, Jimmy Z’s. Instead of snaps or belt buckles, it used an interior belting system with side closure attached by velcro. It was a distinctively looking design. Later in the 80’s, big commercial interests began to take hold and young consumers become willingly inspired by the beach and the surf lifestyle images that the big businesses were propelling into the media. This led to new informal attitudes about dress, swim wear started to become acceptable, day to day wear. Cultural tastes for all things new and anti-fashion pushed the brand “Jams” (swim trunk - over scaled, brightly floral patterns - very loose, cotton baggy sack style, draw string) into a brief, but mainstream and very substantial, fad in the mid 80’s. They were nspired by patterns the founder had once seen in photographs of Russian tourists vacationing at the Black Sea. They were named jams because their first prototype was made by merely shortening a pair of pajama bottoms. 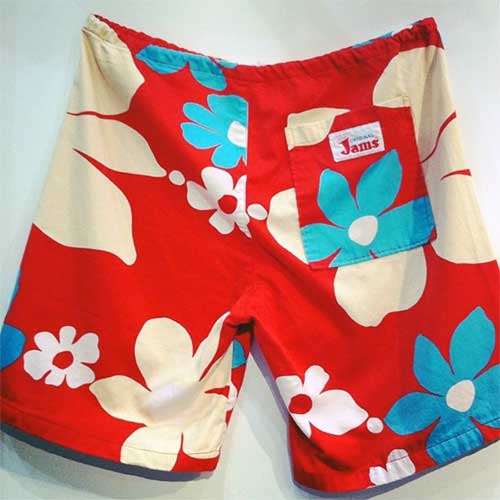 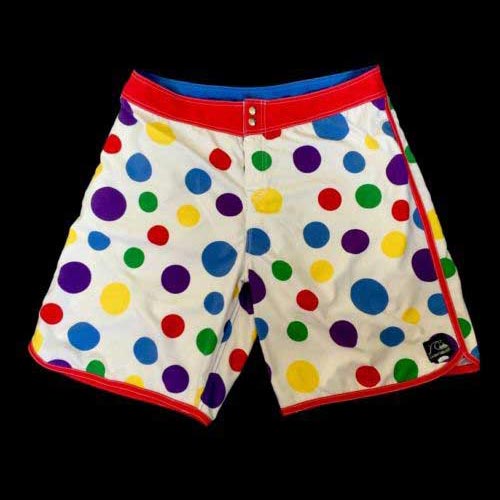 Billabong and Ocean pacific introduces lycra into a short based off of triathlon suits.

(Neoprene shorts, (late 80's) although they were technically wonderful for the time because their seamless design prevented chapping, many felt they had no style and the trend was only popular for a short lived period of time.

Gotcha (Laguna Beach 1978) used aggressive marketing and the connections of its founder (pro-surfer Michael Thompson) to attract many of the days top riders. It was a longer Bermuda style with loud, flashy  designs. For many years a financially dominant brand that was the first surf lifestyle brand to reach 100 million dollars in sales.

During the 90’s, skate culture (which had in the past evolved out of what surfers were wearing) now was larger than surfing and the pendulum of its bulk had swung towards skateboarding dictating surf style. Since it had come from the street, the aesthetic of skateboarding was heavily influenced by graffiti.

We work very hard to make the best quality garments, but also understand that sometimes things don't turn out like you expect. If for any reason upon receiving your order, it is not what you expected and/or you do not consider it money well spent, simply return the product(s) in their original condition / timely manner for a full exchange / discount.