The store will not work correctly in the case when cookies are disabled.

To understand shorts or any fashion style in the present, we have to start by looking at various unique moments in history that likely influenced society’s priorities and how the culmination of those values and situations led to and organically shaped what we now consider as acceptable in present day thinking about men’s shorts.

England prospered during the reign of Henry VIII (1509-1547). A rise of consumerism created a new bourgeois (middle) class that became more influential and started to separate itself from the impoverished gentry. This made it increasingly difficult to tell the wealthy merchants apart from the nobles. In order to make the classes more easily identifiable, King Henry VIII enacted what later came to be known as Sumptuary laws. Sumptuary laws restrict the type and style of clothing (as well as other luxuries), that could be worn. This was sold to the people in the name of being something that regulated and reinforced modesty (for protecting public morals), But what it really did was to create visible class separations and make people easily identifiable based on their social rank. Whereas in earlier times, sumptuary laws existed because they divided people into explicit categories based on class. Modern society regulations are more proscriptive and tend towards appropriate dress being: what people may not wear and often based on religion. An example is sumptuary laws in Colonial American, where Puritans sought to influence identity by curbing extravagance in dress. Regulating dress has gone back a long time, many laws have been written, but few have stood the test of time. Today, Laws on dress haven’t disappeared, so much as having metamorphosized so far away from their original form that their present is unrecognizable from their past.

Before the French Revolution, the working class wore long pants and the aristocracy wore culottes. After the French Revolution, all classes began to wear pants. The pervasive mentality at the time was that shorts were for young boys. Until around the end of the 19th century, male infants in the Western world wore long white dresses, which became shorter white dresses as they grew older and became toddlers. Upon becoming boys, they started to wear shorts and during middle childhood, they switched to breeches and finally in their teens to long trousers. This progression - evolving out of femininity, towards manhood - really did suggest that being an adult male was essentially defined as “someone who wears pants.” (Britches is a variant of breeches, not a corruption)

The innovation of photography at the turn of the 19th century helps give us a better understanding. Shorts owe much of their contemporary origins to the military. Possibly the earliest example (the 1880s) of modern-day shorts is the uniform of the heavily respected Nepalese army. (Much like our khaki shorts of today, but four generous pockets and a distinctive cummerbund waistband with buckles and adjustable straps) The British East India Company defeated the Gurkha soldiers in The Anglo-Nepalese War, but upon surrender had such respect for the bravery and ability of the Gurkha soldiers, that part of the treaty stipulated that Britain could employ its soldiers to fight alongside them in future battles. Present-day, it is a statue of a Ghurka soldier wearing shorts that stands guard in front of The Ministry of Defense at Whitehall, in the heart of the British Empire.

During World War I, Britain set up its North American Headquarters in Bermuda. There was a single tea shop on the island and because of the British soldiers, business boomed. The tropical heat and the steaming pots of tea made the temperature inside the little tea shop oftentimes unbearable. The owner, a man named Nathaniel Coxton, not wanting to spend money on new uniforms for his staff, took all the khaki trousers to a local tailor who cut them just above the knee. Rear Admiral Mason Berridge, who took his tea in this little shop, adopted the style for his fellow officers and named them. The British Navy founded the yacht clubs in Hamilton; St. George, soon officers of the British Army serving elsewhere began adopting the smart looking, summer version of the khaki military uniform. Before long the men in London, who made such uniform decisions on behalf of the military, stated that standard dress was to be khaki shorts amongst all British soldiers serving elsewhere in the sub-tropics of The Old British Empire. The local people of Bermuda certainly began noticing the smartly dressed British officers milling around the yacht clubs and tailors began to copy and modify the style for civilian use. This helped to establish it and by the 1920’s it had become the standard business attire of the local men. At the time, Bermuda was a very popular steamship destination and tourists arriving for winter holiday helped to spread the style back to the United States and elsewhere around the world. 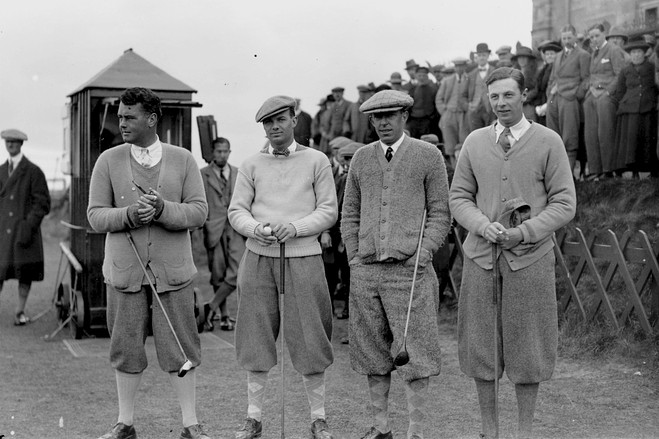 No country has influenced the school uniforms worn by children around the world more than England. Originally, uniforms were first adopted by charity institutions to identify the children receiving charity. Only later, did exclusive private schools adopt the uniforms, with the goal of discipline and uniformity, but paradoxically, the uniforms served to famously identify the status of students from prestigious schools. With few exceptions, it was grey wool flannel shorts, based on the short trouser uniform worn by the British Military in Tropical settings. The style was also picked up by the Boy Scouts, whose founder, Lord Baden Powell, himself a Major General for the British Army. After the turn of the 1900s, baggy-kneed trousers to the ankle known as knickerbockers (or knickers) were the common athletic wear. As these British schoolchildren grew into adults and started to influence the things around them, shorts gradually became more acceptable in society. First, with outdoor activities like hiking and golf and from there they made the very public jump to tennis. In 1932, when Britain’s top-ranked tennis player, Bunny Austin appeared in the U.S. National Championships in Forest Hills, New York, he wore flannel shorts on the field instead of the standard white trousers, but after, before appearing in public, he had to change into clean and ironed long pants.

In the United States up until the ’50s, the unspoken rule of etiquette was that a grown man should not show himself in public while wearing short pants. Some towns looked at this as a matter of common decency and went so far as to ban the wearing of shorts. The city of Honesdale, PA., for instance, banned them in 1938. One city leader telling the newspaper, 'Honesdale is a modest town, not a bathing beach.' In the early 1950s, the United States Golf Association banned golfing shorts for amateur tournament play and to this day the USGA’s PGA forbids players from wearing shorts during competitive play. In the period after World War II, Western civil society began to shrug off the conformity that had been required. Society began to reorganize itself as more casual & perhaps took more of a distrustful view of stuffiness. An outgrowth of the population shift to warmer climates and suburbs, plus the growth of patio culture meant that Bermuda shorts were now seen as acceptable everyday wear. 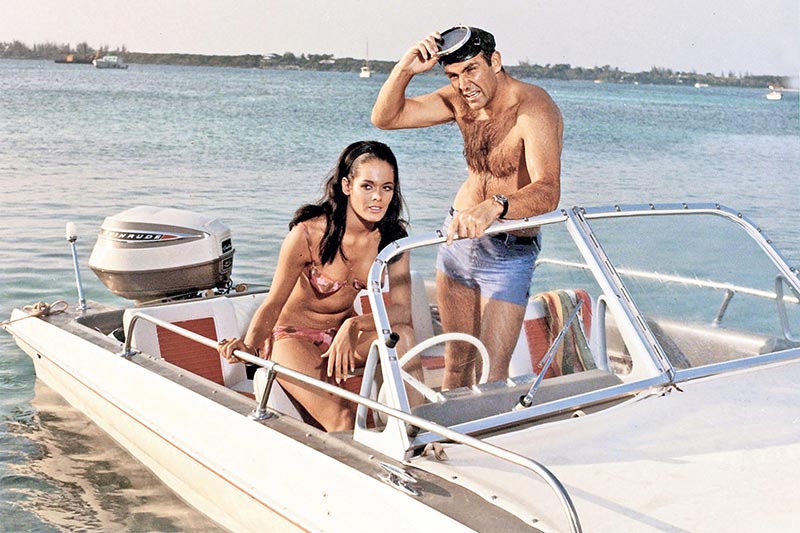 The ’60s brought war, politics, hippies. liberation, festivals and homemade jean shorts. It was anything goes and minds that felt free to question authority. The 70’s followed shortly after with birth control, disco & divorce. All of which gave rise to a newfound openness about putting it out there and expressing yourself through style. People started posing, showing skin and flaunting it …. while questioning tradition and Its stuffy attire. Media moved more deeply into the mainstream and Hollywood started to have a greater influence on our decisions. Styles followed these new open ideas - getting shorter, tighter and more revealing. (Magnum P.I., Bionic Man, Love Boat) The classic OP barely there corduroy surf shorts were the height of beachy fashion. New materials, terry-cloth and polyester and thanks to the fitness craze sweeping the nation, sportswear and fashion started merging & athletic wear became mainstream fashion for the first time. Inspired by basketball legends like Dr. J and Larry Bird and tennis stars like Björn Borg and John McEnroe. Tiny over the top gym shorts became a hot seventies fashion item that took short to a whole new level and make some people glad the ’70s are over.

James Bond fighting tropical foes in skimpy attire and doing for men in Thunderball, what Ursula Andress had done for women ten years earlier in Dr. No. Sean Connery wears three different pairs of Jantzen shorts with their familiar ‘diving girl’ logo (at one time, the 7th most recognizable brand trademark in the world. But because of various disastrous ownership changes, currently only making woman’s swimwear). As the film series progresses, 007’s short inseams gradually gives way to a longer Bulldog cut, a few stylish coin pockets are added - Everything is almost always blue and then his shorts get very short all over again. 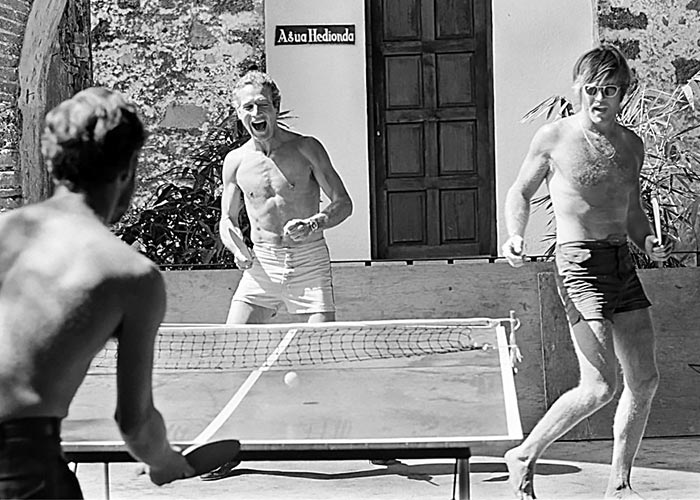 As the 1970s and 80’s came to an end, short styles for men became longer and therefore more modest. Michigan basketball’s 1991’s “best-recruiting class ever” created a cultural shift, from short shorts to a new, longer, baggy short, that asserted ego, personality, and a new style of player. A path of success and swagger from five young guys, that ended up influencing style both in the NBA and on the street.

No piece about men’s shorts would be complete without mentioning cargo shorts – To some, they are the fanny pack of fashion. Cargo Pants were first worn by the British infantry and introduced to American Paratroopers in the early 1940s. During the ’80s, American veterans brought them home with them and they started showing up in military surplus stores. Eventually, they ended up trickling down into street fashion subculture, where people kept the utility of the pockets but did away with the fabric below the knee. It took about ten years to catch on, but all the big brands eventually got in on the action and the largely male demographic flocked to its lazy simplicity in droves. They peaked during the ’90s when oversized clothing was out of control and became something of a way of life for backyard barbeques and college campuses. The thing that held their popularity around longer than it might otherwise have was grunge music. Plus the fact that not enough men had actually thrown their cargo shorts away and the introduction of cell phones, which meant that those empty oversized freeform pockets now had an actual urban purpose and back out of the drawer they came. Slowly, the silhouette was trimmed down - ripstop became chino fabric and the style went on safari…. till the whole concept became so visually ridiculous that backlash started. In 2015, no less than: The WSJ, NYT and Washington Post all published stories that went viral with tales from suffering wives calling cargo shorts a running gag for lazy guys who peaked in high school and liked energy drinks to that they sent a social signal that you’re a guy with a terrible credit score who also takes a lot of selfies. When it all died down they had become the single worst item a man could wear and there was no one left to defend the increasingly out of fashion cargo short.

We work very hard to make the best quality garments, but also understand that sometimes things don't turn out as you expect. If for any reason upon receiving your order, it is not what you expected and/or you do not consider it money well spent, simply return the product(s) in their original condition / timely manner for a full exchange/discount.